In Episode 22, we recap a shockingly one-sided Super Bowl, and instead of gushing about the most-decorated player in NFL history, I try to steer Query away from worshipping at Brady’s altar. We discuss the latest surrounding the Colts’ QB search and the Hall of Fame voting that easily put Peyton Manning in on his first try and left Reggie Wayne out on his second. Also, a discussion about the boundaries of Midtown, IU’s at-large boosting sweep of Iowa, our weekly features, and some college stories that shouldn’t have been shared. 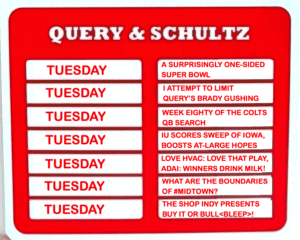 You can also catch the live streams on ISCSN’s Twitter and Facebook platforms and our Query & Schultz Facebook page when the show debuts (Tuesday at 6 PM). If you’re a Comcast subscriber in Central Indiana, you can watch on Channel 81 Wednesday night at 6 PM, with replays throughout the rest of the week. On Thursday, an archived version of the show will also be available via the Query & Schultz YouTube channel.

You can also LISTEN to the show. Here are the links to some of the major podcast platforms where Q & S episodes are available:

If you have any trouble accessing the show and/or streams, please contact us (whenever I say “us”, it always means “me”: derek@queryandschultz.com.